So, the important thing first: my sister-in-law had the baby on May 30 and so I now have two amazing nephews, Henry (the eldest) and Louis (who, in case you didn’t figure it out, is the newborn.) 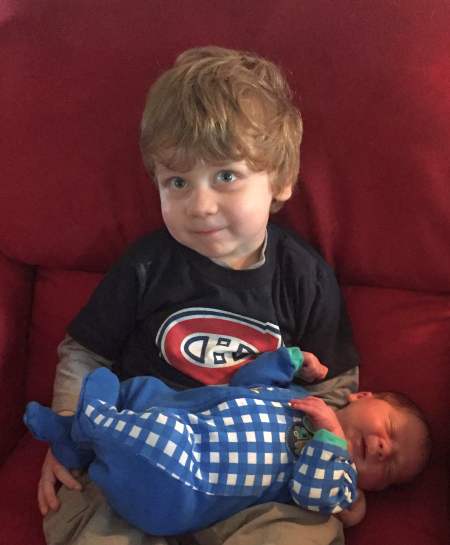 Apart from that, my search for a job has been somewhat fruitful. I start a trial period for a remote job on June 12th, so that’s exciting. Working remote! It’s what I did for four years in the late 90s and I’ve been trying desperately to get back to that for the last, uh, 15+ years. Relatedly, I just did up my budget for June. OUCH. Since I got laid off from my last position, I’m receiving EI, so losing those payments and then having to invoice my new client (for now — hopefully my employer!) at the end of the month is going to mean that June is gonna be tight. I went through a spreadsheet, organized all my payments and expenses and stuff and was like “huh, this isn’t going to be too bad,” when I then came to the startling realization that I had forgotten to factor in things like groceries. Eesh. To think I didn’t want the credit line my bank offered me a couple of years ago…!? I guess there will be no impromptu visit to Ottawa for Canada Day, which is a bit sad-making because it’s Canada’s 150th! I’ve only ever been to Ottawa once on Canada Day and that was in 2010 when my mom and I (yes — my mother. And me. Together. In a car. For two hours there, two hours back and several hours in Ottawa) went because the Queen and Prince Philip were there. (As was Barenaked Ladies, unbeknownst to me. When One Week started playing and I started sinigng along, my mom was like “you KNOW this music?!?!”) Anyway, it’s a shame I’ll miss Alanis, who’s performing this year, and BNL again, but hey. Gotta be responsible, right? Right.

As to class, class is getting… better? I understand how to connect to an SQL database with Java! And we’re starting to play with the GUI, which is all CSS-based, so that’s outstanding. I did skip class to go meet Louis on Tuesday night, though. No regrets! It was, however, the first time I skipped a class out of the 10 weeks of HTML, the 5 weeks of SQL and the 8 previous weeks of Java. Go me.

Finally, all the migrations got done last weekend. Every last site I have (that I’m going to keep) has been migrated to my new host and I couldn’t be happier that it’s all over with. Overall, it went well. Working at my last place of employment taught me a lot about migrations and DNS in general, so it was nice to be able to use some of that knowledge when it came to my own projects. What a giant relief it is that it’s all done, though. Whew!

The next week is gonna be rough:

I’m supposed to see the nephews tomorrow, actually. Well. Today. It’s almost 5am and I’m supposed to probably be picked up at 10:30am? But I’m not sure? I might have to go steal my mom’s car and drive out on my own. The things I do to see my nephew. Well, nephews, now, I guess. :) It’s just that Henry is so damn delightful and says the CUTEST THINGS that are so incongruous coming from him, as opposed to from any adult. “Be right back, guys!” he’ll exclaim, for example. It’s adorable.

Anyway. If I want to be at all conscious, I should head to bed.